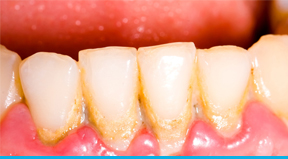 There are over 100 million bacteria in just one drop of saliva that are constantly exposed to our teeth causing several complications in the mouth. Periodontal disease, also known as gum disease, is caused when bacteria builds up plaque between the gums and teeth. Plaque, tartar, malocclusion are major reasons for gum disease.

Gum disease affects your overall body health. It is a primary cause of tooth loss, and is often linked to diabetes. Moderate to severe gum disease has been strongly linked to strokes, adverse pregnancy outcomes and especially diabetes.

Gum disease is an infection in your gums and jaw bone. Your gums may be swollen, red, bleed and receded down your teeth. Usually, gum disease is a silent progressive problem which most people are unaware of until a dental professional alerts them. Gum disease may eventually result in an unstable base for your teeth, which then become mobile and may fall out or have to be removed.

If detected early, it can be treated and managed better. It is important to have regular dental check-ups so that any problems with your teeth and gums can be detected and treated early